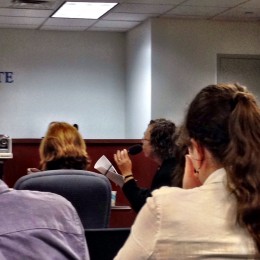 NEW YORK, NY – September 17, 2014 – At the “Public Hearing on New York State’s Role in Addressing the Influx of Migrant Youth from Central American Countries”, politicians, legislators, and advocates alike discussed the continuing surge of immigrant children to New York. The recent surge of children from Central America has put great pressure on the New York government. New York is the second leading state in receiving these children. The Safe Passage Project, along with a coalition of other not-for-profit groups, have been working to provide legal representation to the many children that have come to New York in the recent months. This level of emergency service cannot be sustained without more resources.

“In July, August and the beginning of September nearly 800 attorneys have attended our free trainings and we have six more trainings planned for the remainder of this month. Yet relying on pro bono alone will not meet the legal needs of this vulnerable population,” states New York Law School Professor Lenni Benson.

After observing the harsh realities of scared and vulnerable children unaccompanied in immigration court, Professor Benson created the Safe Passage Project at New York Law School. Safe Passage Project works to train and mentor law students and attorneys to serve as Friend of the Court for hundreds of immigrant children. The volunteers then go on to prepare an assessment and strategy for every case and work diligently to recruit and train pro-bono or low-bono counsel.

Professor Benson’s project is a great success; however, she currently calls on the State to provide additional funding to this vital cause. Professor Benson candidly states, “As we have seen this summer, when the number of children arriving greatly increased, the children are no longer only a story of immigration controls… The question we face now is how will we treat these children relocating to New York State? How will we prepare for the responsibilities in caring for educating them? How will we help our communities and institutions meet the needs of the newcomers?” Professor Benson urges the New York government to recognize this for what this issue is now – a child welfare issue – and to take action for the health and safety of these vulnerable children.

Where New York State Can Help

Professor Benson urges the legislature to consider providing additional social workers and support for educators so that these vulnerable children will have a chance to learn and thrive.

The children arriving from Central America have experienced tremendous trauma and fear both in their country of origin and on the journey to the United States. These past wounds impact their ability to learn, to focus, to study and to feel safe and New York must prepare and plan for their successful integration into our schools, reports Professor Benson.

Almost all of the immigrant children do not live in two-parent households upon arriving to the United States; they are often placed with a close relative or family friend. The need to obtain an order of guardianship for these children is crucial. For example, they must obtain state guardianship to have the ability to enroll in health care insurance; to enroll in school; to apply for a passport requiring both parents’ signatures; etc. But even more importantly, the family court guardianship orders provide these vulnerable children with stability under the care of adults who are publicly committing to protect them.

Professor Benson calls on the State to provide expanded resources to the family courts. She says that New York State should be supplementing what the Federal Government has provided, a limited $19,000. The State should step up to match the federal government’s funds and to create additional funds. For example, New York State could offer loan forgiveness to lawyers who work in child welfare or immigrant rights.

Professor Benson encourages the implement of statewide training of court personnel, special attorneys, and a hot line for attorneys to answer technical questions to help the children navigate the family courts. She suggests the creation of models such as the federal court Pro Se office which helps the more than 30% of federal petitioners with complex procedural rules so that their complaints will survive court clerk inspection.

New York has a responsibility to protect all children living in the State and needs to equip its court system with the resources it needs to do this. At the end of the day, immigrant children are still children.

Her full testimony is provided on our Resources page.