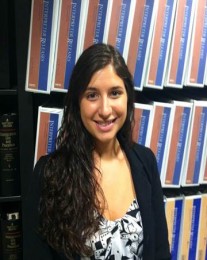 Zarina Syed is an Associate at Gibney, Anthony, & Flaherty LLP, where she works in the Immigration Practice Group. She primarily focuses on business immigration matters, and also handles family-based immigration matters. She is an active member of the American Immigration Lawyers Association’s (AILA) New York Chapter. After graduating from New York Law School, Zarina served as a Graduate Fellow for the school’s Justice Action Center, where she coordinated the public interest engagements of the law school.

Zarina’s interest in immigration law stems from her own family’s history. In the 1950s, her paternal grandparents emigrated from India to America on Fulbright scholarships, and as a young adult, she attended her father’s U.S. naturalization ceremony. Her interests in the field grew while attending Syracuse University, where she spent a semester abroad in Egypt and worked with Sudanese refugees.

After taking Professor Lenni Benson’s Immigration Law course at New York Law School, Zarina started volunteering with the Safe Passage Project while it was still in the early stages of development. Zarina acted as Safe Passage’s Capstone Student and helped to develop volunteer training manuals, as well as presented at Know Your Rights and screenings workshops for immigrant students and their families. She spent her 2L summer working at the Legal Aid Society’s Immigration Law Unit in New York, where she represented juveniles in deportation proceedings. For her pro bono efforts while in law school, Zarina received the 2008 Joseph Solomon Public Interest Award.

More recently, Zarina has attended screenings at Safe Passage’s juvenile docket at New York Immigration Court. Since 2012, she and a team of fellow attorneys at Gibney have been representing two young brothers from Guatemala to obtain Special Immigrant Juvenile Status. Although navigating Family Court procedure was relatively new territory for Zarina, the presiding Judge commented on the team’s impressive memorandum of law at the guardianship hearing – a high compliment from a veteran judge. Today, because of Zarina’s help, the two young brothers are learning English, doing well in school, and enjoying their new statuses as Lawful Permanent Residents.

Zarina finds working with clients from Safe Passage extremely gratifying. She finds that Safe Passage allows her to combine her interest in Immigration Law with her passion in helping vulnerable and underprivileged communities. Zarina is looking forward to taking on her next Safe Passage case.

When she is not practicing law, Zarina enjoys spending time exploring her Brooklyn neighborhood for live music events and new restaurants.