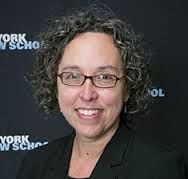 “When unaccompanied children crossing the border to flee violence in Central America became a media firestorm this spring, Lenni Benson knew all too well the legal hurdles that faced them.

The Arizona native began working on the issue soon after graduating from law school in 1983. Then, in 2006, she founded the largely volunteer Safe Passage Project to provide pro bono legal representation to young immigrants.

She suddenly became a sought-after expert on the issue. She was interviewed on ABC, CBS, CNN, Univision and Al Jazeera. Stories featuring Benson appeared in The New York Times and Bloomberg BusinessWeek.

The nation was waking up to what had been largely an invisible problem, decades after Benson first started raising awareness. ‘Those I spoke to would say, ‘What do you mean children are sitting in detention centers?’

Under Benson’s direction, 200 pro bono attorneys are now working with 20 law students to help 230 immigrant children. The program is based at New York Law School, where she teaches immigration law.

Benson, 55, is not shy about seeking volunteers, noted Anthony W. Crowell, New York Law School dean and president. ‘Her mantra at training events is, ‘I’m not leaving this room without three volunteers,’ he said in his nominating letter.

A graduate of what is now the Sandra Day O’Connor College of Law in Arizona, Benson also heads the immigration and nationality committee for the New York City Bar. In August, she spoke at a White House conference on integrating immigrants into American society.

‘I’m a proselytizer for pro bono,’ she said in a phone interview. ‘I’ve seen the joy this kind of work brings to lawyers. I remember jumping up and down when I got happy news for my clients. Lawyers have said ‘I want to have that for myself.'”