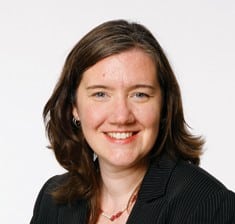 Melynda Barnhart is Professor at New York Law School (“NYLS”), where she teaches courses in Legal Practice, Immigration Law, Crimes in Immigration, and Refugee and Asylum law. Melynda is also the faculty advisor of the Anti-Trafficking Law Students Association at NYLS.

From a very young age, Melynda knew that immigration was one of the most incredibly pressing issues of her time. Melynda grew up in Tucson, Arizona in the 1980’s during which time The Sanctuary Movement was in full swing. The Sanctuary Movement, Melynda explains, is the name to describe a mass migration where Central American families were fleeing their countries due to horrific civil wars. The United States’s government claimed these families were “economic refugees” and undeserving of refugee status. As a result, an “underground railroad” was created to assist these families travel safely through the United States and reach Canada where many would eventually be granted asylum. As a teenager during this time, Melynda volunteered by going to the churches where these families were hiding and playing with the children of these families.

Although having volunteered with immigrant families since her teen years, Melynda gained most of her immigration law knowledge through the Florence Immigrant and Refugee Rights Project, an organization that our own Professor Lenni Benson helped start! As an extern with this project, Melynda provided legal services at a detention center. Melynda was now seeing many of the children of those same families she volunteered with as a teen facing deportation charges as a result of their social and immigrant circumstances within the United States.

It was her departure from this organization that led Melynda to pursue a career in teaching and eventually brought her to NYLS. It wasn’t long before Professor Lenni Benson, her faculty mentor, had her conducting trainings on trafficking and U-visas, as well as volunteering at every Juvenile docket that did not conflict with her class schedule.

In the recent months, Melynda has taken a more active role with Safe Passage due to the increased work volume and need for volunteers since the immigration crisis this past summer. Her role with Safe Passage involves watching proceedings and intervening as a “Friend of the Court” whenever she is needed. Her recurring presence in the proceedings is welcomed by the immigration judges and court officials because having a familiar face in the courtroom, especially one as qualified and experienced, helps the proceedings run in a more efficient and just manner. Safe Passage is grateful that Melynda constantly takes time out of her busy schedule to volunteer at the docket.

Melynda believes she is right where she needs to be in her life because she is once again helping and protecting deserving children against unfortunate circumstances. In a way, Melynda’s life has come full-circle and she could not be happier about it! When Melynda isn’t teaching or volunteering with Safe Passage, she enjoys energy healing and is currently in training to become a practitioner in gem stone energy healing.