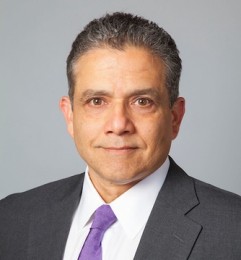 Robert Drolet is a second year evening student at NYLS. Robert’s interest in immigration law can be attributed to his vibrant past. Robert, although born in New York, comes from Mexican heritage; he is the first person in his family’s generation to be born in the U.S. During his tenure as a Naval Foreign Liaison Officer, he spent extensive amount of time in several Latin American countries   Robert’s personal and professional life experiences afforded him a first-hand understanding of the difficulties involved in melding different cultures and the logistical drivers of many those who immigrate to the U.S.

Even though he is not yet an attorney, Robert stands out as a selfless and invaluable volunteer. In his first week of school, he became involved with the Safe Passage project, volunteering as an interpreter. While most first year students spend the last weeks of the semester cramming for finals, Robert spent the morning of his criminal law final volunteering as a court runner with Safe Passage. (Although it took some probing, Robert finally admitted that he got an A on the final, but he strongly believes karma played a large part in his grade.)

Robert has a Bachelor of Science in Human Resources Management from The New School in New York and a Bachelor of Engineering degree from Georgia Tech. Postgrad, Robert served as a Nuclear Engineer with the United States Navy, and was selected as a Naval Foreign Liaison Officer to South America. Robert is a registered Professional Engineer in Florida, and currently is a Senior Engineering Resource Manager for Sodexo Corporate Services. Even with a very full (very accomplished) plate, Robert’s desire to continue to contribute drove him to law school to pursue yet another professional career.

When asked how he finds the time to volunteer on top of his busy work and academic schedule, Robert says, “you find the time”—an assertion that is confirmed by the fact that in just over a year, Robert has worked on four asylum cases through Safe Passage; two of which have been approved! Robert also notes that “even as a student, we are able to help people in a way we couldn’t even fathom before coming to law school.”

Robert is looking forward to officially registering as a student with the Safe Passage clinic in the spring, although it is almost certain that he will volunteer as long as he is needed. And…yes there is more…in his down time (when do you have time Robert!?) he enjoys going to the gym. Bravo!