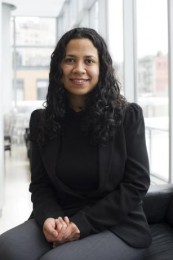 What makes Gloria Chacon a powerful representative of the immigration lawyers community is that she was in the United States illegally, for three years in high school.  She escaped the threats and gang violence of Honduras when she was 15 years old with her mother and sister amid death and rape threats from political opponents of the family.

“Her grandmother, a permanent U.S. resident, had petitioned for green cards for both girls and their mom. However, after Chacon’s mother narrowly missed being shot, she realized they couldn’t wait the years it would take for their visas to be finalized…

“The three flew to stay with an aunt in New Jersey and ended up overstaying their tourist visas. Now that she is trained as an immigration lawyer, Chacon realizes they had other options, including a bid for asylum.  “We did not have a good attorney. I didn’t realize a lot of this until I took immigration law myself. If we had had a well-versed attorney or someone who knew maybe a little bit more than just family processing, there were ways for us to get status sooner. We ended up undocumented for three years,” she said.”

Chacon was not always determined to be an immigration lawyer.  “”I originally didn’t think I would do immigration. We had a difficult time being immigrants ourselves and I think I was a little sore from that,” said Chacon. But New York Law Prof. Lenni Benson, director of The Safe Passage Project, which provides counsel to undocumented children, encouraged Chacon to volunteer. Soon she realized that immigration law was a much better fit.  After graduation, she became one of 25 new lawyers selected to be a part of the Immigrant Justice Corps’ inaugural class of fellows. The new two-year program, the vision of Chief Judge Robert Katzmann of the U.S. Court of Appeals for the Second Circuit, puts talented new lawyers in the position to represent immigrants fighting deportation.”

“Chacon said she now feels like she’s in the right place at The Door in SoHo — helping young immigrants who have fled their Central American homelands.  “You ask most of them why they came, and they won’t talk about the abuse they suffered, or the gang violence … they will just be like, I want to go to college and study,” Chacon said. “A huge majority have very big dreams.””