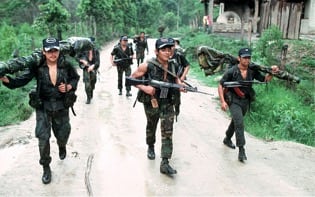 A Brief History of How the Gangs Came to Be:

“Formed as a republic in 1839, it fell under the influence of US corporations which established vast fruit plantations on the northern coast in the 19th and 20th centuries. It was the original “banana republic”.

Relations between Honduras and its neighbours have been complicated. In 1969, it went to war with neighbouring El Salvador over a football match. In the 100-hour conflict 4,000 people were killed and 130,000 Salvadorans fled or were expelled from Honduras.

In the 1980s, after a Soviet-backed bloody coup in Nicaragua and left-wing guerrilla insurgencies in El Salvador and Guatemala, Honduras became the stronghold from which the United States attempted to stabilise the region against the forces of Communism. Clandestine airbases and training camps were built from which the CIA-backed Honduran and Nicaraguan Contras waged war against the leftist Sandinistas. State-sanctioned political repression, disappearances and death squad executions were ubiquitous. Many Hondurans and Salvadorans fled to the US, and in particular to Los Angeles, where the two major gangs now operating in Honduras originated – 18th Street (M-18) and Mara Salvatrucha (MS-13).

In 1996, a US immigration law allowed the Federal Government to strip foreign-born residents of their citizenship and deport them to their countries of origin if they were sentenced to a year or more in jail. Approximately 20,000 people were repatriated to Central America between 2000 and 2004 under this rule. Many had spent most of their lives in the United States.

Among them were the two fully formed, bitterly rival, gangs. Mara Salvatrucha and 18th Street brought gang culture to the region, where violence and extortion is now commonplace.“