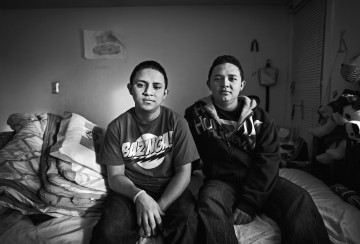 This article from The New Yorker by Sarah Stillman, covers the story of the Godoy family and their journey for reunification.  Melida and Alfredo Godoy, parents of four, came the the United States from Guatemala for economic opportunity and safety for their then-three children.  Alfredo came first, in 2000, and his wife and two-daughters followed suit.  They had to leave their two sons behind, in hopes of making enough money to pay for them to be transported to the US at a later date.

The boys, Brayan (above, left) and Robinson (right), made it to the Texas border, only to be kidnapped and held for ransom.  The story does not end, however, when their parents were lucky enough to have the police on their side and safely rescue their boys.  The boys then had to go through detention centers and court proceedings, fortunately enough with a lawyer.  “85% of kids who face immigration proceedings without a lawyer are ordered to be deported, compared with just under 30% of those who have representation.”

The story is not yet over for the Godoy family, as their court proceedings have not yet concluded.

To read the full story from The New Yorker, click here.