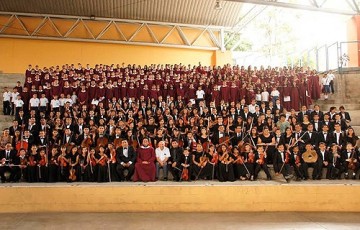 The Don Bosco Youth Symphony Orchestra and Chorus is made up of 130 young people from the poorest and most violent neighborhoods of San Salvador, El Salvador.  The Orchestra, a project formed to keep the youth out of the gangs by showing them that they are talented and have potential, is performing in Washington, D.C. this week.

The group’s performance at the Kennedy Center’s Millenium Stage, began with the national anthems of the United States and El Salvador, and continued with works by Handel, Verdi, Schubert, Mozart, Carl Orff, Ben E. King, Celia Cruz and others.

The musicians and singers are scheduled to perform again Wednesday at 6 p.m. at Shrine of the Sacred Heart in Columbia Heights and at noon in the atrium of the World Bank.  After arriving Sunday, the performers stayed one night in a hotel, then will be put up by local families for the rest of their visit through Friday morning.

To read the full article from the Washington Post and learn more about the Don Bosco Youth Symphony Orchestra, click here.