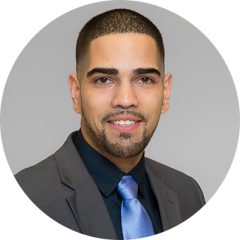 Danny Alicea has volunteered with the Safe Passage Project providing legal screenings to children in Immigration Court since October of 2014, when he became the Fragomen Fellow at the City Bar Justice Center. Sponsored by Fragomen, Del Rey, Bernsen & Lowey, LLP, the largest immigration law firm in the world the fellowship enables Danny to work closely with City Bar volunteers to increase access to pro bono immigration counsel.

As a Latino and native New Yorker, Danny has always been heavily involved in the public interest field. Before law school, he was a paralegal for the non-profit organization Immigration Equality. In this position, Danny became a Board of Immigration Appeals Accredited Representative and represented lesbian, gay, bisexual, transgender and/or HIV- positive asylum-seekers. In 2013, Danny graduated from CUNY School of Law. where he was the Editor in-Chief of CUNY Law Review and a member of the Immigrant and Non-Citizen Rights Clinic. Danny’s contribution to the community never stopped. During law school, he was a Judicial Intern at the New York Immigration Court, and also worked for the New York Legal Assistance Group and the HIV Law Project, assisting clients with housing, disability, public benefits,  immigration, and family court needs.

Since he joined Fragomen as a Fellow, Danny has been assisting Safe Passage and our Safe Passage children. He still remembers the first legal screening he did for Safe Passage at the New York Immigration Court because it was hard for him to forget the young boy that he met and helped. The young boy was traumatized and was in a very delicate mental state. Working with young people who have experienced trauma is one of biggest challenges Danny encounters when he is speaking or translating for our Safe Passage kids. In order to best serve the children, Danny reminds himself that this experience is about them and not about him and to try his best to make the legal screening process easier and less frightening. To Danny, volunteering with Safe Passage is an enjoyable experience during which he can help kids and advocate for them. We thank him for his continued support and dedication to our Safe Passage kids.