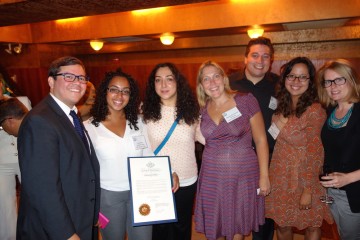 The New York Immigration Court has thousands of Central American children facing deportation proceedings. These children are fleeing some of the most dangerous countries in the world. Each week the Safe Passage Project, a nonprofit housed at New York Law School, and volunteers from the pro bono community greet children at the court and help the children navigate complex immigration laws and procedures. U.S. law does not currently provide anyone with free counsel in immigration proceedings, even children who have traveled alone to the U.S. borders.

The Safe Passage Project was created to try to fill the representation gap by recruiting, training and mentoring attorneys and law students to aid these immigrant children. The number of immigrant children placed into deportation proceedings has grown rapidly. A year ago the Project committed to covering the immigration juvenile docket once a week, expanding from monthly service. In addition, the Project tripled its efforts to recruit and train willing pro bono attorneys.

The response of the legal community was tremendous. In the past year Safe Passage Project has hosted or participated in at least sixty trainings working with over 4,600 attendees in those trainings. Some participants attended an entire series of trainings in order to step up to meet the needs of children who may be seeking asylum or other legal protections. Most of the children qualify for some type of immigration law protection but without counsel, the promise of protection is illusory.

On August 12, 2015, Director of the New York State Office for New Americans, Jorge Montalvo (pictured in the photo below) presented a proclamation from the State of New York that formally recognized the contribution the volunteers of Safe Passage Project are making to the lives of immigrant New Yorkers. Mr. Montalvo spoke about the important of legal representation for these vulnerable children noting that while they have other needs, legal representation is central to their well-being. Also speaking to the audience was Policy Analyst for the New York City Mayor’s Office of Immigrant Affairs, Sam Solomon. He emphasized the critical importance of volunteers who give of their time and expertise to help children. Project Director, Professor Lenni Benson, thanked the many volunteer attending and shared statistics for the past year of work. The Project has enrolled over 500 pro bono attorneys, approximately 250 have current cases. In the past year Safe Passage Project has assisted 418 young people with free legal screenings and/or pro bono representation. Pro Bono attorneys received certificates of appreciation from the Project and heard words of encouragement and respect from the government officials. Documentary Photographer Elizabeth Shafiroff and Philanthropist Jean Shafiroff joined Safe Passage Project staff and government officials in thanking the pro bono volunteers.

In addition to the volunteer work of attorneys and law students, Safe Passage Project has been working with volunteer social workers, college students from John Jay College of Criminal Justice and others who donate books, art supplies, backpacks, travel vouchers and their interpretation skills. Bistro Seven donated refreshments for the event in support of the generous work of the pro bono attorneys.

More help is needed. Interest attorneys and volunteers are encouraged to visit www.safepassageproject.org and volunteer or provide financial support. No child should face immigration court alone.