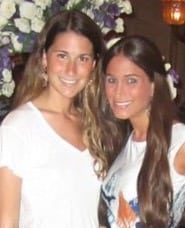 Lauren A. Tetenbaum and Jillian M. Singer have been pro bono attorneys for Safe Passage since
November of 2014. Lauren and Jillian are former classmates and colleagues, as well as close friends. They met in 2007 while attending the Cardozo School of Law in New York; they then served together on the board of the Cardozo Advocates for Battered Women student club. Jillian graduated in 2010, while Lauren graduated in 2011 after also pursuing her Master’s in Social Work from NYU. Upon graduation, they had the opportunity to work together at NYC Administration for Children’s Services. Currently, Lauren is a Business Immigration & Compliance Associate Attorney at Greenberg Traurig, LLP; as of September 2015 Jillian is an Attorney at Balestriere Fariello focusing on commercial litigation. Since law school, Lauren and Jillian have been heavily involved in the public interest field and have consistently given back to the community.

In November 2014, Lauren and Jillian both became aware of the increasing numbers of unaccompanied minors entering the United States and decided to pursue volunteer work to help with SIJS (Special Immigrant Juvenile Status) matters. Lauren ran a search on Google for “volunteer with SIJS” and Safe Passage’s program came up as a result! After a welcome introduction to the SP team, Lauren and Jillian decided to volunteer for Safe Passage and were soon assigned their first case.

Since SIJS cases typically involve both family (i.e. state) court matters and immigration (i.e. federal) matters, they made a dream team with Lauren’s knowledge of immigration law, Jillian’s experience with litigation, and both of their backgrounds in family law. They each utilized their respective expertise to assist their young client, who is now on her way to obtaining a lawful permanent residency in the United States.

Their client is a shy and sweet 15-year-old girl from Honduras. Her father had abandoned her at birth, and by last summer, her grandmother was unable to take care of her anymore. In June of 2014, she crossed the Mexico-United States border with her 7-year-old brother to reunite with their mother. Lauren and Jillian worked diligently and attentively with the client and were able to get an approved I-360 petition within under 8 months after meeting their client, a process that normally takes up to at least a year

Lauren and Jillian have found working with the Safe Passage Project to be incredibly rewarding. More importantly, their hard work and tremendous effort has changed a 15-year-old girl’s life forever. Their client will now be able to pursue the educational opportunities that she deserves and will have a bright future in the U.S. with her family.