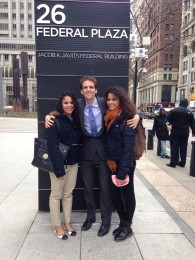 The most important factor in whether a child facing deportation gets to stay or not, studies have shown, is whether they have an attorney. But many of the thousands of Central American unaccompanied minors who are awaiting deportation hearings across the country face immigration judges with no legal representation.

A bill introduced in the Senate yesterday, the Fair Day in Court for Kids Act of 2016, would aim to change that. The measure, sponsored by Senate Majority Leader Harry Reid and several other Democratic senators, would require the federal government to appoint immigration lawyers for unaccompanied minors. It would also mandate representation for other people facing deportation who have disabilities or are survivors of abuse or torture.

Children who have legal representation are five times more likely to win asylum. “Having a competent attorney can make the difference between life and death,” ACLU lawyer Joanne Lin said in a statement.

Now, lawyers are provided by a patchwork of nonprofits and pro bono organizations. In New York City, for example, the City Council provides funding to a coalition of legal groups to represent unaccompanied minors. But that funding doesn’t serve children living outside the city, like in Long Island or upstate New York. Some small pro bono projects are at work in states like Texas and California, but they’re overburdened with clients.

Overall, only about a third of children facing deportation have legal representation.

Gui Stampur, the Director of Legal Services for the Safe Passage Project, a group that represents unaccompanied minors in New York State, said about 80% of the children that his organization represented appear to qualify for deportation relief under U.S. law. But without representation, it would be almost impossible for them to navigate the maddeningly complex immigration court system.

The majority of children throughout the U.S. do not currently have council,” he said. “It’s a real tragedy given the age of the kids, given the incredibly traumatized history these children go through.”

One of Stampur’s clients, he said in a phone call from the hallway outside immigration court in downtown Manhattan, was a six-year-old girl from El Salvador whose feet didn’t touch the floor as she sat before her judge. She didn’t speak a word of English and didn’t understand the complicated legal proceedings that would determine whether she would be deported or not.

“Between the trauma, the age of the children, the language barrier and really the fear of being in court… it’s incredibly scary for them,” Stampur said. Passing the Senate bill, he said, would be a “brave step in the right direction.”

It seems unlikely that the Senate bill has a good chance of passing the Republican-controlled Congress. Sen. Bob Menendez, one of the bill’s sponsors, has suggested attaching it to “must-pass legislation,” ThinkProgress reported.