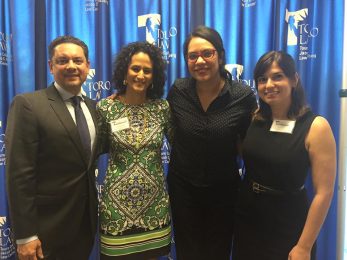 On May 20, 2016, Senior Staff Attorney Alexandra Rizio presented at the 2016 Northeast People of Color Legal Scholarship Conference, held at Touro Law Center. This year’s conference theme was “Confronting the Violence of our Times: the Role of the Legal Academy.” The audience was comprised mainly of law professors devoted to social justice.

Alex sat on a panel titled “Immigration Rights and Wrongs: Reversing the Deleterious Effects of Current Immigration Policies.” Her presentation, “Challenges of Representing Unaccompanied Immigrant Youth in New York City,” discussed the causes of increased child migration from Central America to the United States, and their treatment upon arrival in the United States. She then described Safe Passage Project’s innovative strategies to provide these children with legal representation, and how a community of advocates in New York City, helmed by Safe Passage, is working to ensure that all children have a chance to have their claims heard in a court of law.

Professor Morín’s talk, “Hate, Violence, and the Construction of a Latina/o Criminal Identity Past and Present” placed the current surge in anti-Latina/o immigrant sentiment in a historical and legal context.