Since March of this year, Alexandra Rizio, Senior Staff Attorney, and Samantha Norris, resident Social Worker, have coached a team of Safe Passage Project and non-Safe Passage Project clients in the in an all-female soccer league for high school girls in the South Bronx. The league is organized by a community-based organization, South Bronx United. In their first year as a team, Las Cheetas Chulas (The Cool Cheetahs) finished second in the league overall. 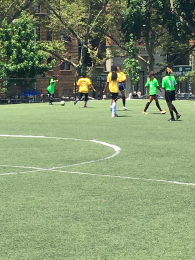 While the coaches know many of the players through their cases at Safe Passage Project, Alex said they “purposefully don’t talk about anything related to the office during the practices or games.” Instead, she said that Las Cheetas Chulas provides the girls with an opportunity to “learn to play as a team and have a place to deal with some of the difficult issues that they are facing.”

Furthermore, the all-girls team was forced to assert itself against the male teams, which, according to Alex, would “encroach on field time for the girls” and even start “heckling the girls.” As Sam said, “It’s a powerful thing to give kids a safe space to play, especially young women who have traditionally been marginalized and oppressed.” Alex and Sam hope to continue their work with Las Cheetas Chulas in 2017. 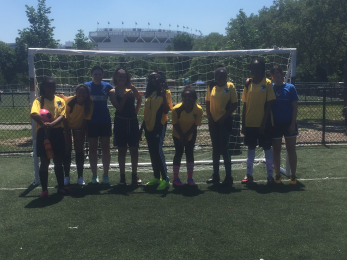