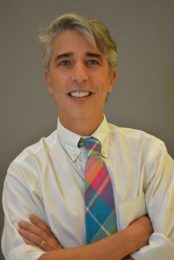 The Safe Passage Project is proud to announce that Harry Shulman is this week’s Attorney of the Week. Harry has been volunteering with Safe Passage for over six years and has assisted us in many different ways. From representing clients in asylum and SIJS cases to conducting client intakes at immigration court, Harry has contributed greatly to Safe Passage’s mission of providing quality representation to children facing deportation.

Harry is an active member of the immigration law network here in New York City, demonstrated in particular through his involvement with the American Immigration Lawyers Association (AILA). In addition to volunteering with AILA and attending many of their events, Harry was the co-chair of AILA’s pro bono committee in 2013 with Kristy Dalling. Harry has had a fascinating career path with many interesting experiences that have led him to continue pursuing volunteer work in this field. After graduating from Tulane University in New Orleans, Harry worked in New York City trading commodities for a decade before attending law school. He received his J.D. from Cardozo Law School in 1993.

Harry’s interest in immigration law was sparked during law school when he took a course on immigration taught by the distinguished immigration lawyer Leon Wildes, who represented John Lennon and Yoko Ono in their deportation proceedings in the 1970s. During law school, Harry participated in an immigration clinic at Catholic Charities, where he learned firsthand about asylum law and was and continues to be inspired by immigration attorney Mark Von Sternberg and all the other dedicated and self-sacrificing attorneys and staff who work in this area of the law.

Over the past 15 years, Harry has dedicated much of his time to advocating for the rights of immigrants. Harry has represented immigrants on a pro bono basis in partnership with AILA, KIND (Kids in Need of Defense), and Safe Passage. From representing a Chinese man who was persecuted due to his involvement in the Falun Gong community, to assisting with intakes of detained immigrants at the Varick Street Detention Center, Harry has a wide range of experience in this field. For Harry, one of the biggest rewards he receives from this work is the connection he makes with the clients. In particular, Harry remembers one of his clients calling him non-stop on September 11th to make sure that he was safe after the World Trade Center was attacked. This touching, close human connection is what inspires Harry continue to volunteer his time and assist these clients.

Harry also really enjoys staying in touch with clients and seeing what their lives are like after their cases have been resolved. For Harry, it is such a great feeling to see his clients living successful, happy, lives. Even for clients who continue to have difficult lives, Harry appreciates that he could contribute to taking at least one burden – having to worry about their immigration status – off of their shoulders.

In reflecting on his relationship with Safe Passage, Harry stated “I really appreciate the support that Safe Passage has given me throughout the entire process. The people at Safe Passage not only helped me with a lot of the heavy lifting, but also just genuinely cared about the case and the client we were helping.” Harry has found the cases he worked on with Safe Passage to be very interesting and complicated, often with lots of surprises and lessons along the way. Despite the complexities of this field of law and the cases, Harry says that it is an extremely cooperative environment and that everyone he has met through this work has been so helpful and genuine. He stated, “I feel so lucky to be in a position to help the Safe Passage Project.” We at the Safe Passage Project feel lucky to have Harry on our team! Thank you, Harry, for all of the time, effort, and energy that you contribute to enriching the lives of the Safe Passage clients and team!