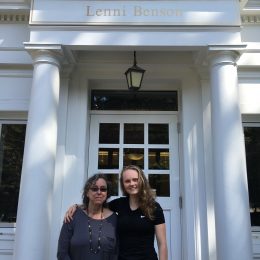 This year Professor Lenni Benson has been chosen for the Jolli Humanitarian Award at Riverdale Country School. Each year students at Riverdale Country School write essays to nominate someone the students believe deserve to be recognized for outstanding humanitarian work. Past winners have included: Frank Mugisha an activist whose work focuses on Uganda, Pernille Ironside, a child advocate for UNICEF who has worked in war zones around the world; Rachel Lloyd, an anti-human trafficking advocate; Geoffrey Canada, the former leader of the Harlem Children’s Zone; and Leymah Gbowee, the 2011 Nobel Peace Prize winner and leader of a women’s peace movement.

Professor Benson was nominated, and won, for her work recruiting, training and mentor attorneys to represent unaccompanied children in removal proceedings. She began the Safe Passage Project as a pro bono project which is currently housed at New York Law School. She was nominated by current Riverdale student, Erin Cooper. Lenni’s passion for helping people is not only obvious but it is also contagious. Lenni’s energy is contagious. From the minute she walks into the room, things move forward. You can tell in Erin’s moving nomination essay that she was also affected by Professor Benson’s ability to motivate people.  Today the Safe Passage Project has grown to have full time staff attorneys, legal fellows, social workers and a large group of law students working together to assist the over 400 actively involved pro bono attorneys.

Professor Benson is pleased that at the Jolli Award assembly on November 1, she will be joined by Gui Stampur, the Safe Passage Director of Legal Services, who is also an alumnus of Riverdale Class of 2000,  several other Riverdale graduates, who have interned at Safe Passage, and a former Safe Passage client.

In addition, on October 30, Riverdale’s Middle School will also host its 4th field day at RCS, where the clients of Safe Passage Project can enjoy a day playing soccer on the Riverdale Campus alongside RCS students. 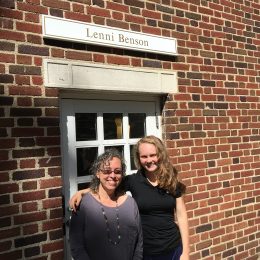