We are very proud and inspired by our colleagues Alex Rizio, Claire Thomas and Founder Lenni Benson for the roles they have played in response to the recent executive orders on immigration and refugees.

The following post appeared originally on New York Law School’s website. Click HERE to read it there. Since this posting, a Temporary Restraining Order (TRO) has been issued against key components of the executive order and is currently making its way through the 9th Circuit Court of Appeals. 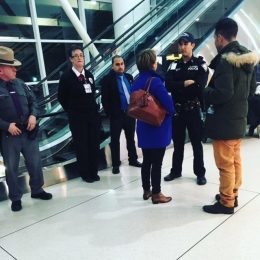 Across campus, Professor Deborah N. Archer, who co-directs the School’s Impact Center for Public Interest Law, teaches its Civil Rights Clinic, and leads its Racial Justice Project, began hearing from students who were eager to help. There was barely any time to plan as the names of affected families began to trickle into Professor Archer’s Facebook and email inboxes.

NYLS has long been active in legal advocacy and representation involving the nation’s most pressing immigration law issues, which often affect New York City. This time was no different, except for the glare of international media.

By Saturday, the situation intensified. Travelers from the seven countries whose flights had been in transit when the Executive Order was signed continued to arrive at JFK Airport. Thomas threw her phone charger and a hard copy of the Immigration and Nationality Act into her bag and hopped onto the A train, bound for the airport. The Air Train was eerily devoid of travelers with luggage; instead, Thomas found herself surrounded by sign-carrying protesters. She kept Professor Benson on speed-dial.

Soon after she entered JFK Airport’s Terminal One, Thomas began fielding questions from Yemeni and Iranian families anxiously awaiting news about relatives detained after landing. She connected with representatives from the New York City Mayor’s Office for Immigrant Affairs and shared immigration law knowledge with volunteer attorneys drafting habeas petitions on behalf of those detained. Soon after, Professor Vicki Eastus and Justin Meeks 4L Evening, who are also part of the Impact Center, arrived and set to work answering family members’ questions and connecting them with attorneys. Professor Benson fielded calls all day and throughout the following night, sleeping with her cell phone under her pillow.

Meanwhile, from points throughout the city, Professor Archer and her students were relaying the names and contact information of affected families to the American Civil Liberties Union (ACLU), which is representing many of the detainees. The group was also working closely with detainees’ relatives, including a man whose wife was refused entry to the U.S. and sent back to Qatar, where she had been visiting family. Throughout, Professor Archer and her students kept in close touch with Thomas and others at JFK Airport, performing research and rapidly proofing habeas petitions remotely.

That night, when a federal judge from the Eastern District of New York issued an order halting some portions of the Executive Order, the NYLS team scanned the first copy they could get—a photograph of the decision posted to Twitter.

Six habeas petitions and countless legal questions later, Thomas left the airport. It was around 2 a.m. on Sunday. Shortly after, she learned that one of the detainees she’d worked with, a green card holder from Iran, had finally been released. After a brief respite, the NYLS team was back at work drafting petitions and making referrals. The pace of work is unlikely to slow: news reports reveal that more than 100,000 visas have been revoked since the Executive Order was issued. ~