Carlos Ball is a Professor of Law at Rutgers University, where he teaches classes on Constitutional Law; the First Amendment; and Sexuality & Gender Identity and the Law.

Outside of the classroom, he is also an advocate for Safe Passage Project’s young clients. Carlos started volunteering with Safe Passage Project in 2017 when he took on the cases of three young children to help them apply for Special Immigrant Juvenile Status.

Carlos was moved to volunteer with Safe Passage Project after the 2016 presidential election. Though he didn’t have experience working in immigration law, he felt he needed to take a stand against the increasing attacks on migrants. As a law professor, Carlos already participated in some amicus briefs and big picture advocacy, but he felt that he also needed to start using his legal skills to provide direct representation to young immigrants in need. This led Carlos to Safe Passage Project.

“Working with the Safe Passage Project has been a tremendously rewarding experience for me. The organization has supported me each step of the way as I have  represented three Guatemalan children, all from the same family and under the age of 10, in Family Court and Immigration Court,” said Carlos. “At a time when the federal government is doing everything it can to return immigrant children to their countries of origin regardless of their personal circumstances, organizations like Safe Passage are playing a crucial role in helping pro bono attorneys like myself successfully advocate on behalf of the best interests of our immigrant children clients.”

Carlos says the most important thing he has learned throughout this process has been just how much of a difference having an attorney can make. Before beginning to volunteer with Safe Passage Project, it had been some time since he had done direct representation and he had forgotten the immense impact that legal representation has on people’s lives. He says he can’t envision these kids dealing with this system – Immigration Court, Family Court, and more – without an attorney.

According to Carlos, making steady progress on his case has been the highlight of his work with Safe Passage Project. Working on a complex case with three young children has not been easy, but after about 14 months, several hearings, and many complications along the way, he was able to successfully secure guardianship for the young children’s grandmother – a critical step toward being granted Special Immigrant Juvenile Status and ultimately legal permanent residency.

Safe Passage Project was thrilled to present Carlos with a 2017 Mayoral Service Recognition Award for his amazing work on behalf of the young people we serve. 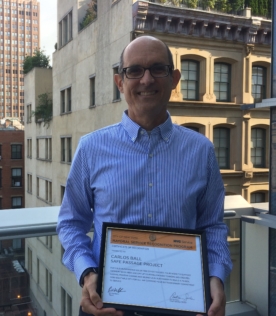