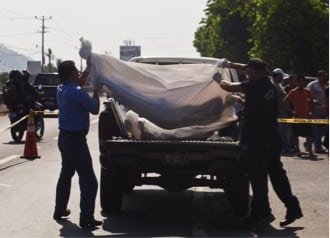 If you are a woman, an adolescent or a child, you are more likely to die a violent death here in El Salvador than anywhere else in the world. If you’re a man, only next-door Honduras is more dangerous.

But because this “war” of gangs — against each other and the country itself — is not seen as a conventional “armed conflict,” those who are leaving are generally not considered “refugees,” at least not by the United States. They know they face kidnapping, rape, maiming, forced labor, disappearance, and murder on the migrant routes, but they feel that’s a certainty if they stay in El Salvador. Rape is a tool for fear, extortion, murder, forced disappearances.

The violence forces 130,000 Salvadorans to relocate to somewhere else in the country every year. And as many as a third of them have to move a second time within the year to find a location far enough away from their old home so that no one might recognize them and report back to the gangs.

To read the full article or listen to the report, click HERE.