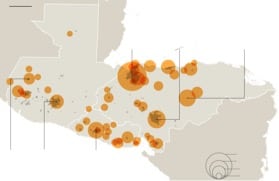 The above image shows where the surge of unaccompanied minors from the Northern Triangle are fleeing from.