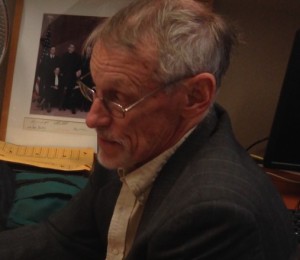 Robert Hilliard is a retired immigration attorney from New York. Mr. Hilliard graduated from Amherst College with a degree in Russian. After receiving his undergraduate degree, Mr. Hilliard joined the Peace Corps in 1968 and moved to El Salvador just as the civil war was beginning. He would remain in the country for three years as a volunteer. To say that his experience in El Salvador during this time is relevant to his law practice is putting it mildly!

Upon his return to the United States in 1971, Mr. Hilliard decided to pursue a law degree at SUNY Buffalo Law School. Mr. Hilliard initially went into private practice, but ultimately spent most of his career in the nonprofit sector. Having graduated from law school in 1975, Mr. Hilliard retired in the early 2000s after thirty years as a dedicated immigration lawyer. However, Mr. Hilliard did not retire to stay home and twiddle his thumbs. He went back to work as a court interpreter, a position he continues to fill when needed.

In August 2014, Safe Passage had the pleasure of connecting with Mr. Hilliard and recruited him to volunteer at one of the Surge Dockets at the New York Immigration Court, where he met seventeen year old Gabriella. (NOTE: the names have been changed to protect the identities of the young people). Gabriella came to court with her older sister and ORR sponsor, Carla. Carla is not a stranger to Safe Passage – she was one of Safe Passage’s very first clients. Carla’s pro bono attorney helped her receive Deferred Action for Childhood Arrivals (DACA). Carla’s boyfriend is also no stranger to safe passage – he was represented by our very own Guillermo Stampur!

Mr. Hilliard interviewed Gabriella at the Surge Docket. She told Mr. Hilliard that she made the journey to the United States with her younger brother, Diego. The siblings lived in Copan, Honduras. This city, Mr. Hilliard learned through help of the Safe Passage students, is located right on the boarder with Guatemala and is a major cocaine trafficking route. When Diego was eleven years old, he was shot twice during an ambush in the leg. After this horrific incident, tragedy struck the family again when two of the sibling’s uncles were shot for not investing in the drug business. One uncle was shot and killed, while the other uncle is now a paraplegic as a result of his gunshot wounds. The identity of the shooters was later revealed to be corrupt police officers that were paid off by drug traffickers. After their uncle’s death, Gabriella and Diego were afraid that the drug traffickers would come after them. Gabriella and Diego were particularly heartbroken over the death of their uncle, who was like a father to them since their biological father had abandoned them many years before. Only adding to their fear, Gabriella and Diego’s cousin was raped and impregnated by a gang member. Their cousin left Honduras shortly after the rape, and the same gang members would taunt Gabriella threatening that she would be next. The siblings decided to flee Honduras to live with their older sister, Carla, in the United States.

After hearing their stories, Mr. Hillard quickly moved to put together their Application for Asylum. Carla was very helpful in gathering many documents needed, including their uncles’ death and medical records. She also gathered the necessary documents from their mother in Honduras, who remained taking care of a brother who suffers from mental disabilities. Mr. Hilliard filed the Applications for Asylum and requested that both siblings be scheduled on the same day. Mr. Hilliard also submitted a medical report prepared pro bono by Physicians for Human Rights in connection to Diego’s gunshot injury, which still hurts the now fifteen year old Diego to this day. The siblings were scheduled for back-to-back interviews at the Asylum Office a few days before Christmas.

Mr. Hilliard says that the most important thing at the Asylum Office interview is for applicants to tell their story. The Asylum Officer then has the opportunity to ask clarifying questions to ensure the applicant’s credibility. Mr. Hilliard shared that the Asylum Officer asked Diego how far away the gunmen were on the day he was shot in the leg. Diego, classic kid, says the gunmen were “seventy-five miles away.” The Asylum Officer followed up and asked him to point to an object that was about the same distance away. It turns out that the gunman was much closer than seventy-five miles; actually more like seventy-five meters! Even if the story did not come out in the most organized way, it is details like these, said Mr. Hilliard, that strengthened the siblings’ credibility. Early in 2015, Gabriella and Diego were granted asylum.

When Mr. Hilliard is not volunteering (and winning) with Safe Passage, he volunteers as an interpreter in state court, as well as with Central American Legal Assistance and AARP Tax Preparation services. He also recently began studying the Irish language. So much for retirement, huh?!