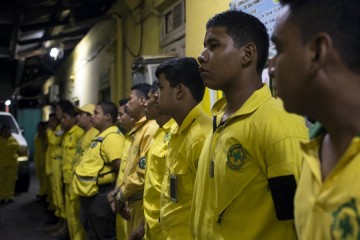 Gang violence is skyrocketing in El Salvador. May finished with more than 600 murders, more than any previous month since the country’s civil war that ended in the early 1990s. Young people are often the victims, but the members of the Comandos de Salvamento or The Rescue Command are on the front lines in a different way.  Comandos de Salvamento is an organization in El Salvador which is partly funded by the government and partly by donations from the public to operate as local ambulances.

The last months have been some of the bloodiest in El Salvador since the civil war. In March, an average of 16 people were killed every day, in May the number spiked to 21, according to authorities. With a population of just 6.1 million people, El Salvador is likely to pass Honduras this year as the world’s most violent country outside of a war zone.

The Rescue Command has about 3,000 volunteers, about half of them in the capital area. People come and go according to the time they have. Many, like García, are students from neighborhoods that are known to be violent.

Roselva Melgar, a 21 year old volunteer, was promoted as head of a division, after the previous person in charge decided to quit because the job was too dangerous. Sometimes volunteers live in areas controlled by a gangs that is different from the one that is active near  the organization’s headquarters, which is enough reason for a person to be attacked or killed in El Salvador. Their bright yellow uniforms are well-known and they usually can do their work without being interrupted, even in gang controlled areas. But the uniform is no guarantee of safety.

The young volunteers can be sent to any kind of emergency scene, including traffic accidents, shootings and murders. They have training in first aid and depending on what’s needed, bring the wounded to a local health center or a hospital.

To read the full article from PRI, click here.