Making a Difference in the Life of a Child:
A profile of Stephanie E. Gibbs, NYLS Alumna and Safe Passage Project Mentor Attorney

Safe Passage Project, part of the Impact Center at New York Law School, works with volunteer attorneys and New York Law School (NYLS) students to provide legal representation for unaccompanied minors in the immigration process. In 2014, Safe Passage assisted over 500 children and has assisted many more in previous years. This important work would not be possible without the assistance of Safe Passage volunteer attorneys, many of whom are alumni of NYLS. 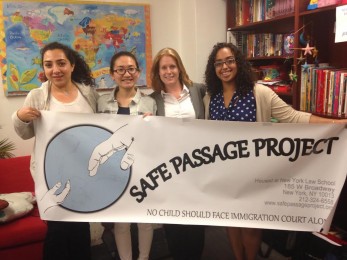 Stephanie E. Gibbs, who is also a mentor attorney for Safe Passage and an alumna of New York Law School, exemplifies the dedication, passion, and expertise necessary to competently and effectively assist immigrant children.

Following graduation, Stephanie was employed as an immigration attorney, first as an associate at Barbara J. Brandes & Associates and then as of counsel at Criscione, Ravala & Tabatchouk, LLP (CRT). Stephanie quickly realized that working for a firm did not give her the freedom she wanted with her clients. In August of 2014, Stephanie opened her own practice, Law Office of Stephanie Gibbs, LLC, in order to assist more clients on a flexible and tailored basis. In addition to her practice, Stephanie works as a part-time mentor attorney for Safe Passage to assist volunteer attorneys on their pro bono cases. Stephanie has provided direct representation on numerous Safe Passage cases, but her most recent case can truly be described as a seemingly impossible mission that she made possible.

The client of this case was Meixiu Liu, a young woman from China. Meixiu had a very difficult life in China. Her father was a gambler and alcoholic and her mother passed away when she was 8 years old. Meixiu was raised by her grandmother, but life wasn’t easy and Meixiu’s shaky relationship with her father was getting worse. Meixiu wanted to seek a better life and the opportunities that she would never have back in China, she so decided to come to the United States.

Meixiu entered the United States when she was 19 years old in July, 2014, with a student visa. In June of 2015, she transferred to a public school in District 79 and she fell “out of status.” This meant that she was no longer able to renew her student visa. However, at school, Meixiu participated in an immigration screening and discovered that she might be eligible for a form of immigration relief known as Special Immigrant Juvenile Status, or SIJS. SIJS allows young people who have been abused, abandoned or neglected by one or both of their parents to remain in the United States. Obtaining SIJS would let Meixiu remain in the United States lawfully and allow her to apply for a “green card.” But, there was a problem. Meixiu would turn 21 in three months, and SIJS is only open to young people under the age of 21. Meixiu went to several non-profit organizations to seek immigration assistance, but was denied services because none of them had the resources available to help her because of the time restraint.

A school administrator contacted Safe Passage about Meixiu’s situation, and Safe Passage staff asked Stephanie to take the case. At the time, Stephanie was already working on 6 cases for Safe Passage, not including cases from her own law firm. Nevertheless, Stephanie did not hesitate to assist Meixiu because she knew that obtaining SIJS in this short time frame could be possible and that she should, at the very least, try.

Meixiu was surprised when she received a call from Stephanie saying that Safe Passage was able to help. Meixiu stated that she had already lost hope and didn’t think it was possible, but Stephanie made her believe that there was still hope and that they shouldn’t give up.

In the short time span of only three weeks, Stephanie was able to put together Meixiu’s guardianship petition and have all the necessary documents translated to into Chinese with the help of Xixi Liu, an NYLS law student in the Safe Passage clinical class. Stephanie then had the paperwork served on Meixiu’s father in China, who sent back notarized paperwork to the United States.

Despite all the hardships Stephanie came across while working on this case, she was determined at every turn for the case to be successful. The final hearing in the Kings County Family Court, during which time the Family Court Judge signed an order that is a prerequisite to filing for SIJS immigration relief, happened only three days before Meixiu turned 21! Stephanie filed Meixiu’s applications with the United States Citizenship and Immigration Services (USCIS) the same day. Stephanie and Meixiu are now awaiting an interview and a final adjudication on Meixiu’s application for lawful permanent residency.

Stephanie’s help, through Safe Passage, has changed Meixiu’s life forever. Had Meixiu turned 21, her options to remain in lawful immigration status in the United States would have been very limited. Meixiu is grateful to Stephanie and was unable to express her thankfulness with words. Meixiu is now able to pursue a better life, continue her education, and hopefully obtain permanent residency in the United States.

This was exactly the kind of difference Stephanie wanted to make with her career. By assisting a young person to obtain a “green card,” Stephanie knows that she is changing someone’s life and making a difference, even if it is a small one. Stephanie also stated that she is humbled and privileged to be able to work with Professor Benson and Safe Passage. NYLS alumni like Stephanie enable Safe Passage to truly make a difference in the life of a child.