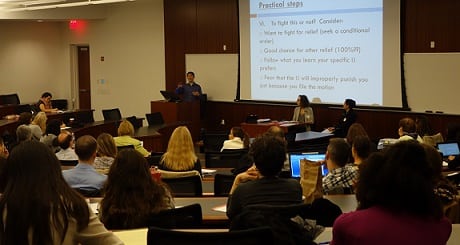 In the morning, Lenni Benson and Claire Thomas gave a presentation on “Getting Started Representing Immigrant Youth.” The introductory training provided an overview of unaccompanied children, their countries of origin and why they are migrating alone to the United States.  This training also explained how unaccompanied children arrive in New York and the role of the Safe Passage Project in the New York Immigration Court. In addition, this training focused on advocating for immigration relief for unaccompanied children and featured two of the most commonly used legal remedies: Special Immigrant Juvenile Status (SIJS) and asylum.
The afternoon session was led by Rex Chen on “Filing Termination Motions in Immigration Court to Defend Children: A Training and Discussion.”  Liz Jordan from The Door and private immigration attorney Bryan Johnson were additional presenters.  Over 60 people, representing a wide range of private law firms and twenty non-profit organizations, participated in a training and discussion about an emerging area — filing termination motions in Immigration Court to defend people who were mistreated by the government.  The event may turn out to be a landmark in generating a critical mass of engaged immigration lawyers to challenge government misconduct in the NY area.
Rex presented the legal basis for terminating cases where the government never properly served the Notice to Appear on the child and a responsible adult for the child, failed to give a child an I-770 form (which contains information about the child’s fundamental legal rights), and mistreated children (such as putting detained children in painfully cold cells for several days, unreasonably interfering with their sleep, or refusing to provide adequate medical care).
Rex highlighted specific legal tactics along with case stories from courts around the country.  Audience members participated in a lively discussion to share ideas, brainstorm strategies, and inspire each other to file termination motions.  The audience also shared information about how particular Immigration Judges respond to these types of motions.  Safe Passage agreed to create a discussion group to allow everyone to keep in touch by email and share information after the training.