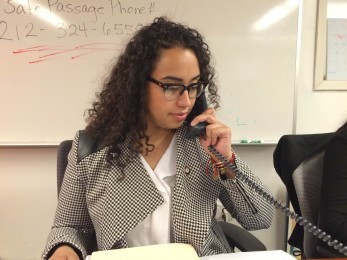 Luisa Lebron, Justice AmeriCorps fellow, recently completed her first SIJS case, receiving the USCIS approval notice on the I-485 application for lawful permanent residency on Monday March 7th, 2016. Her last day with Safe Passage Project was Friday, March 11th, 2016. Luisa is relocating to an Immigration Firm in Toronto Canada. Luisa was a tremendous asset to Safe Passage Project. In addition to being a resourceful and talented attorney, Luisa’s passion for her work is palpable and inspiring. Her empathy and kind spirit leave a mark on every client and family she works with.

Stephanie Gibbs sat down with Luisa to discuss her success, her experience as a justice AmeriCorps fellow, and her thoughts on Safe Passage Project overall.

SG: Tell me about your case with the recent approval of the I-485 application for permanent residency!

LL: It’s actually a case of 3 siblings, but that client is the youngest of the three. Her case has been unique since the beginning.

SG: What do you mean by that?

LL: It was a custody case in Suffolk County, and her custody and special findings orders were granted at the first hearing. I had never submitted a special findings motion in writing, I made an oral motion and the referee granted it.

SG: I’ve actually seen that in another case. The family judge requested that they do an oral motion instead of a written one, so he was able to move forward on it.

LL: Everything had been done by the first hearing, so instead of wasting resources and time, the judge said, “If you’d like to make an oral motion, let’s do this.” And I said “Okay.”

SG: When did you start that case?

LL: I know. That’s not how I expected it to go at all, especially given my experiences now. But this was definitely my quickest one.

SG: Tell me about your client.

LL: She is nine, born in 2007. She’s tiny, she’s really shy. It’s really cute, when she’s signing all of the documents, it takes her a really long time to write her full name out. Her mom says she’s been having a little bit of difficult with it.

SG: Has she been practicing?

LL: She has been practicing! We usually just sit there and watch her write out her full name, and her brother is always giggling in the background, saying that this will take a whole year for her to do. The family overall has been awesome though.

SG: Where is she from?

SG: What were the most important resources that you were able to use to get this case done quickly, or rather, well?

LL: I think one thing that was really helpful was actually having a meeting space out on Long Island, at Jadeja & Cimone. For the family to bring over 3 kids to the city is really expensive, so they would always get a ride over to the Jadeja office and that made everything much easier.

As far as other resources, this was one of the first cases that I had really taken on. At the beginning, this was first year that justice AmeriCorps was doing this, so it was taking a little bit to pick up cases. Now we’re getting cases often.

This was one of the first cases I took on, and having staff support was super important. Having Gui and Desireé supervising it the whole time. This was my first time in family court, so I had spoken to them about it before going in. Which is extremely important. But they sent me out there, and it was on my own and I called them after and said “So, yeah, I got the special findings and custody orders.” And their reaction was “What?!” I had prepared the special findings motion to submit that day, for the next hearing, which I had previously assumed was going to happen.

SG: That’s extraordinary. How do you feel about doing this case in the context of the mission of AmeriCorps overall, as a national organization that is designed for service in the community?

LL: This wouldn’t have been possible without justice AmeriCorps. Their funding goes to us and the kids on Long Island. Seeing that annual report and how many cases we actually have on Long Island in comparison to the other counties, it’s pretty insane how many children live out on Long Island.

LL: I originally met one of the siblings, and their cases were on a different docket than the other two, and we were able to consolidate them so that mom wouldn’t have to travel out here so many times. It wouldn’t have been. Hearing the parents and the genuine “Thank you,” after I call them to tell them, I mean, justice AmeriCorps mission became real. It’s a very nice feeling. 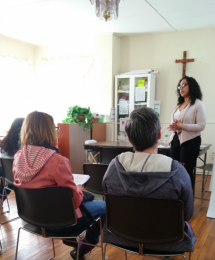 SG: What would you say to other people who are looking to serve through justice AmeriCorps?

LL: I would tell them to definitely do it. I mean, also, it builds such a great network. I had a client move down to Texas, and through using our justice AmeriCorps Facebook page, I was able to find somebody for them to talk to when they got to Texas. That gave the mother peace of mind. She was already moving to a new state, pulling her kid out of school, so this was one less thing to worry about. She already had an immigration attorney stepping into the state.

We send each other samples of motions that were submitted somewhere else that we never considered doing. There was a motion to wave fingerprints – that’s something that other [districts] may not have tried out, so it’s an option for someone to now be able to use in their states.

The national training was also great because you meet people from all over the country who are doing the same thing, the same mission. You hear what’s going on in the courts around the country, and you see what’s working. Some courts are stricter than New York, so it gives you a glimpse into what’s really happening.

It’s also just really great networking. This is actually a true story, the other day I was walking down 42nd Street towards the bus station and I saw someone with a jacket with an AmeriCorps logo. And I tapped him on the shoulder and was like “I’m a justice AmeriCorps fellow as well.” And they were like “Oh that’s cool!” and then I told him what I do and then we shook hands and then went on our way. It was really good. They were working at a school, trying to get resources for schools in New York so that was pretty awesome. Such a small world! I came back and I told Juan Carlos, another fellow, “I saw someone else like us!” 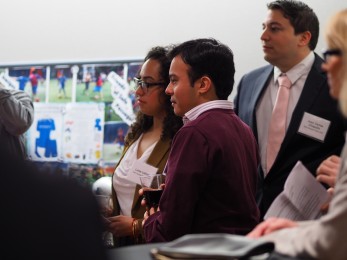 SG: Justice AmeriCorps could place people at several different locations, how do you feel about working with Safe Passage Project?

LL: So before I even became a justice AmeriCorps fellow, I had been working with Safe Passage Project. During my last year of law school, I did their clinic. I genuinely say “I love Safe Passage.” I think what we do is just amazing. A lot of the families tend to remind me of my family, you know, immigrants that are coming here you know, to try to advance the family and giving their children a better future. Being able to help families do that is very rewarding experience. I have enjoyed my 2+ years that I’ve been volunteering and helping. I love it. It’s an overall good experience.

SG: Even though Safe Passage Project’s mission is directed at children in removal proceedings, you still our approach as holistic and helping whole families?

LL: I think it helps out whole families. I get calls from mothers who are genuinely concerned about what’s going happen to their child. I’ve met parents that say that even if they have to go back, they want to make sure their child will be alright, that they can stay here. It gives them peace of mind to knowing that their children are one day going to get status here in the U.S. and to be able to achieve more than they ever thought they could achieve.

SG: What about the cases where we’ll screen a child at court, do an intake with them, but ultimately may not have the resources to take on that case? How do you feel about those situations?

LL: It’s heartbreaking. Even doing a 40 minute intake, you feel for the family. You know that they brought their kids to do an intake to try to find an attorney. And we have had to turn some away. But I think one of the most important things we do is giving them the additional list of resources. Even though we can’t take the case, here is a list and we always emphasize how important it is to call every number on the list. Until they find someone who can take the case on. I know that is not like us directly representing on the case, but they’re still getting a list of resources that they didn’t have until we handed it to them. I wish we could take everybody, but realistically we cannot yet.

SG: Is there anything else that you want mentioned?

LL: I think what was really important to me, in addition to representing kids, were our field days, our holiday party at John Jay College. I think I enjoyed those very much. I helped planned our first holiday party, which really kicked it off and that will repeat every year. One, it’s a great way for our clients to meet other kids that are also going through it, a lot of times our kids can feel very alone. It’s a great way for them to meet kids. 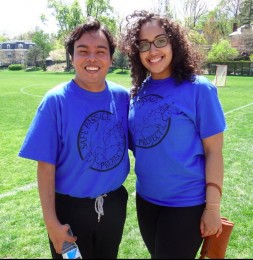 When I went to a meeting last week with my client, she was wearing one the jackets that had been donated. In her letter to me, saying “thank you for everything that you’ve done,” it also said “Thanks for the jacket, I wear it all the time.” It’s little stuff like that mean a lot to them, mean a lot to me as well.

What more can be said about Luisa Lebron? Luisa was an indomitable member of the Safe Passage Project for two years, and her advocacy was as fierce as her hair was on point. And though she will be missed, we are thrilled about the opportunities on her horizon and wish her nothing but the best.

Thanks for everything, Luisa.