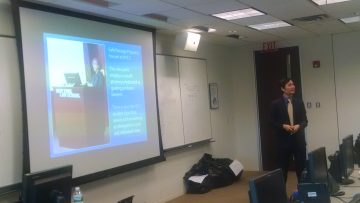 Safe Passage Project attorneys Stephanie Gibbs and Rex Chen were honored to give a legal training about protecting immigrant children on Tuesday, October 25, 2016 at the Chubb offices in Whitehouse Station, NJ. Joe Francoeur, a partner at Wilson Elser Moskowitz Edelman & Dicker LLP, helped organize handouts and materials along with giving moving introductory comments. They gave a compelling description of the causes for the Central American refugee crisis along with the crisis in immigration court. They then focused on two major ways to protect children — Special Immigrant Juvenile Status and Asylum.

The 16 attorneys who attended asked very thoughtful questions and were surprised by how difficult it can be to obtain legal protections.  Stephanie and Rex enjoyed the training facilities, the food provided, and how interested the audience was.

Special thanks to Joe Francouer for his help with preparing the presentation and also to all the audience members who then signed up to volunteer in immigration court later that week! 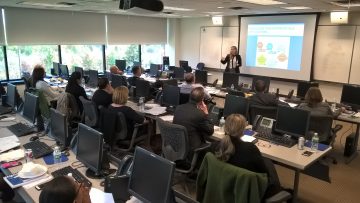