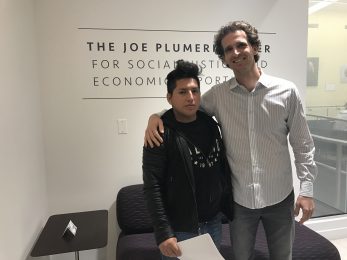 Earlier this month, Safe Passage won Legal Permanent Residence for a young client after over 5 years of hard work in three different New York Courts. Safe Passage met Danilo in 2012, when he was just 14 years old.  Danilo’s family could not support him adequately and protect his best interest in his home country. He made the perilous journey on foot to the United States in search of safety, support, educational opportunity, and his mother.

Safe Passage went to Family Court, Immigration Court, and appeared before USCIS on behalf of Danilo in helping advocate for Danilo and his stable future in the United States. Thanks to the support of Safe Passage, Danilo has also successfully enrolled in school and is loving being a new New Yorker.